Raymond DeWalt completed his first woodworking machine in 1922. The machine worked to increase versatility and productivity for woodworkers.

In 1924, their Wonder-Worker universal woodworking machine became their primary product. This product had nine different configurations, serving as a multi-use device. By 1941, they were in rapid expansion due to a variety of wartime machinery demands.

It was 1992 when the company introduced portable electric power tools to the market. From here, they put a lot of focus on creating products for residential contractors, professional woodworkers and remodelers.

After 1992, they focused on innovation. This is when they started creating more tools and items like their DeWalt generators. The company experienced rapid growth regarding their product offerings and the demand for the items that they manufactured.

By 2001, DeWalt boasted over 800 accessories and more than 200 electric power tools. In 2011, they put emphasis on their lithium ion tools, adding more than 20 Demo Steel Accessory products and 100 Impact Ready items.

The company expanded their manufacturing space in 2013. During this year they added another facility in Charlotte, North Carolina. In 2015, they added more manufacturing facilities, resulting in having seven total throughout the United States.

2015 is also when the company introduced Tool Connect. This technology allows people who have batteries that are Bluetooth-enabled to track and connect to their tools from anywhere.

It was in 2016 when another improvement to DeWalt generators happened. This is when the FLEXVOLT battery was introduced. As a result of this innovation, DeWalt generators experienced more run-time and power due to automatic voltage changes when you changed the tools connected to your generator.

DeWalt is continuing to focus on developing products that offer flexibility for professionals and everyday people who pursue a variety of DIY products. Their generators and other items are made throughout the US.

What is the DeWalt FLEXVOLT?

The FLEXVOLT battery on some DeWalt generators is the first of its kind. When you are using a variety of tools for a job, they will often have different voltages. On a generator without this type of battery, all of these tools are essentially treated the same. This can result in reduced run-time.

With this type of battery, it is able to adjust itself automatically as the voltage demands change. This allows for greater battery efficiency which increases the efficiency of the generator overall.

To put it simply, the FLEXVOLT batteries on DeWalt generators have a 6Ah charge capacity. They are 20V Max battery packs. These batteries operate at a higher capacity than a standard generator battery.

These batteries contain three sets of cells, all of which run parallel to one another. Due to this design, the batteries run cooler. This is because in heavy-duty applications, the packs are less heavily taxed compared to other battery types.

As a result of these traits, the FLEXVOLT battery has more run-time. When you are switching between different tools connected to your generator, a mechanical switch connects to the battery cells that are present in a series.

So far, the DeWalt generators that have these batteries are showing fewer power losses and greater run-time with a variety of tools that operate at different voltages. This includes the newer tools in DeWalt’s product lineup, including their 60V Max Brushless Power Tools.

This technology is not available with any other brand of generators. While not all DeWalt generators have FLEXVOLT batteries, most of the newer models do come equipped with these automatically.

The traditional generators manufactured by DeWalt come in numerous sizes. This brand’s larger models come with handles and wheel kits. Due to these features, you can easily pull the generator around until it is properly placed with limited exertion. On the larger models, the handles usually fold down so that they are not in the way when you are not moving the unit.

This brand uses never-flat wheels. These wheels cannot be punctured, and they will not run low on air. Because of this, you do not have to worry about flat tires.

DeWalt designs their generators to operate relatively quietly. You will find that most of them function at 85 decibels or less. Because of this, you can use your generator on a worksite or at home without disturbing the people around you. Multiple models also have idle control and a muffler to further reduce the noise that the generators produce.

Several models have different gauges and meters, such as fuel gauge and a run-time meter. The fuel gauge allows you to easily see when it is time to add more gas. Use the run-time meter to track how long the generator has been running so that you know when you need to perform routine maintenance, such as changing the oil.

On average, the generators from this brand run seven to 12 hours when you have them going at half load. This allows you to get through an average workday before you have to refuel to keep the generator going.

This brand of generators offers a variety of outlet types, including some models having USB outlets for small electronics. In many cases, the outlets are covered so that they are protected against dirt and moisture when you are not using them.

DeWalt uses OHV engines for optimal durability and power. The generators are equipped with low-oil shutdown to ensure protection against inadequate lubrication.

DeWalt has smaller power stations as part of their generator lineup. Several of these units not only work as a source of power for small items, but you can also use them to jump start a vehicle battery or air up your tires.

The power source component of these devices is ideal for small electronics. Use them for your mobile devices or to recharge the batteries of your camping lanterns. Since these units are lightweight and have handles, you can easily carry them around with you. They are also small enough to fit into every vehicle trunk without taking up a lot of space.

The air compressor part of these units operates at an average of 120 PSI. This makes them ideal for airing up most standard vehicle tires so that you are not stranded with a flat tire.

Use the jumper cables to get your vehicle started after the battery dies. You will use the cables like any pair of standard jumper cables. The negative and positive clamps are clearly marked, making it easy to use this device for this purpose. It is possible to disconnect the cables when you are not using them so that they are not in the way when you are transporting this power station.

These devices have screens so that you can get important information about the operation of the device. They have different outlets that make connecting your small devices easily.

The Following Are Among the Best DeWalt Generator Options 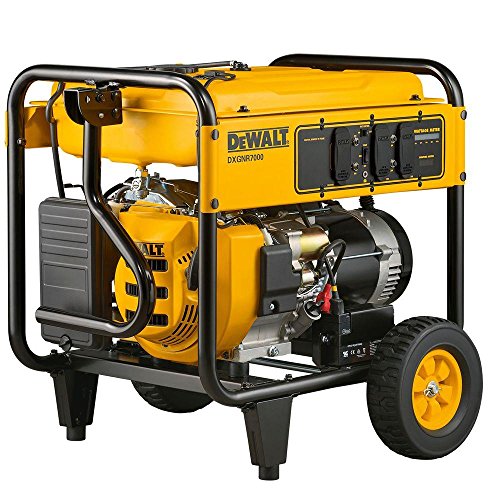 The DeWalt PD123MHB008 Portable Generator has 14,000 starting watts and 11,700 running watts, making it a very powerful unit. You can use this as a source of home backup power or to power large worksites.

It features a Honda OHV engine to ensure optimal power even when you are running it at a full load. The engine shuts off for low oil to preserve its integrity.

This generator has a wheel kit for easy portability. Its steel frame features a lifting hook too, allowing you options regarding how you move it around.

At half load, you get about eight hours of run-time. The fuel tank accommodates up to 10 gallons of gas, reducing how often you need to refuel.

While this is a large generator, it only puts out about 83 decibels when it is running, so it is relatively quiet. It also features a muffler to make it even more quiet during operation.

The DeWalt DXGNR5700 Portable Generator gives you about 10.5 hours of run-time when you are using it at half load. It has 5,700 running watts and 7,125 starting watts.

This generator’s frame is made from hardened steel ensuring optimal durability. You can move it around with ease thanks to its handle and never-flat wheels.

All of the outlets are covered to protect them against moisture and debris. There are three outlets on this unit. Use the hour meter to determine when you need to perform routine maintenance.

This generator’s fuel tank can hold up to 7.5 gallons at a time. The 389 cc engine provides adequate power that does not decrease at full load. If the oil level gets low, the engine turns off, helping to prevent damage as a result of inadequate lubrication.

This generator is relatively quiet. It also features idle control to decrease the noise that it puts out while also improving its fuel efficiency. 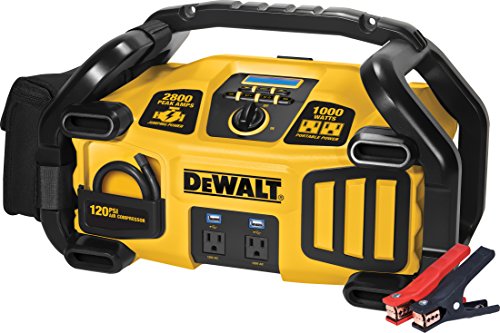 The DeWalt DXAEPS2 Professional Power Station has 1,400 instant amps and 2,800 peak amps. You can use this unit as a small portable generator and as an air compressor. It will also work as a jumpstart device for your vehicle, and it comes equipped with battery clamps so that you can connect this device to your vehicle’s battery.

The air compressor component provides 120 PSI. When you are using it to jumpstart a vehicle battery, the metal clamps are clearly labeled as negative and positive. If there is an improper connection, the reverse polarity alarm will let you know.

You can use this device in all light conditions thanks to its LCD and LED screen readout. Use the 120V AC outlets and the USB ports to connect small devices to provide power to them. This unit is ideal for things like charging your cellphone or getting some power for your laptop computer.